These last months have been difficult ones for all of us and it stuck me today exactly how many of the adverts popping up on Facebook are for Mindfulness courses and how much most of us are in need of support right now. Today I also read an article in an online paper relating to the growing popularity of Tarot and the fact that in these times of uncertainty people are turning to ancient practices both through therapy and as a form of practical advice and guidance as well as to provide support and comfort.

I have shared here before the Moon Books free ebook Weathering the Storm which is a great source of support but until I read about Tarot today, had completely overlooked suggesting my own Moon Books Publication Web of Life as a means of support in these challenging times.

Web of Life is a way of deepening your connection to the world around you, a modern way of accessing the ancient wisdom of the medicine wheel but one that is personal to you. Within the book are exercises that help you to understand how you connect to everything, plus where and how you can find guidance that is specific to you. There is also a way of making cards for yourself that can be used for insight, to plan a path or to see your way through a time in your life or even a project.

Working with the exercises in Web of Life will help you to learn more about yourself, how you connect to everything around you and can provide comfort through helping you to know exactly where you are and giving insight into what is happening.

I’m going to share a few reviews here to save you trawling back through posts to find them:

There are many ways for people to find books that call out to them, resonate, or seem to fit as a much needed resource and one such way is through book reviews.

I try and post reviews here as I find books that readers may find interesting so I am always delighted when someone posts a generous and helpful review of something I have written.

This is a ‘hot off the press’ review for my book Web of Life. If you haven’t discovered it yet then maybe this will help you decide to go explore. 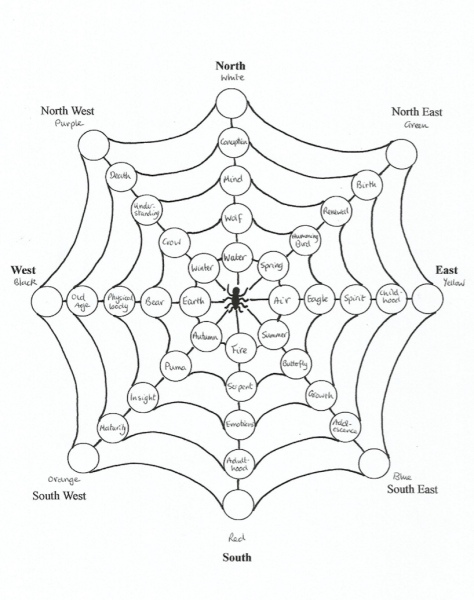 Connections in my own ‘Web of Life’

It has been suggested to me recently that the title and cover of my book ‘Web of Life’ published as part of Moon Books Shamanic Pathways series doesn’t really explain what the book is about so I thought I’d try and redress that here in the hope that it will help.

I actually wrote the book as a result of my own struggle to work with a Medicine Wheel, a struggle that led me to realise that the problems I was having were because Medicine Wheels do not belong to either my culture or my belief system. It was a bit like ‘square peg into round hole’ and no matter what I did it wasn’t working.

So I began to explore other cultures and wheels including the variations between Native American tribes and in doing so discovered both the similarities and differences. This exploration led me to the realisation that in order for many of us to work with the power of a medicine wheel we needed a way to create our own, one that could be adapted to fit us and so the idea for my book was born.

The title of my book is actually down to my guides, who showed me the web, the matrix, or network that connects each and every one of us to everything that exists and through which we all have the power to communicate. Alongside this they showed me the spider at the centre of the web, the spider that represents ourselves, spinning our own web and weaving in the connections within it that can support and guide us as our paths unfold. They also taught me how we can consciously weave our own paths within the web either for projects or our lives in general. The book passes on all that I learnt so that you can do the same. Basically it gives you a modern day, culture and belief free way of working with power of the Medicine Wheel in a way that fits YOU. 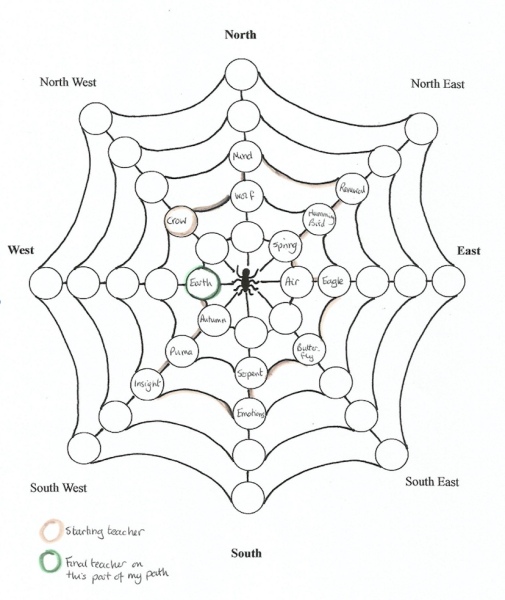 Example of a created path

Example of an extended path 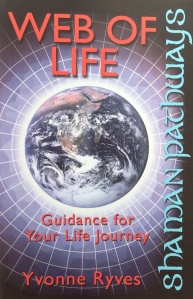 Follow the link here to see what it’s all about

As some of you reading this may already realise, I my first, and so far only, book, ‘Web of Life’ was published by Moon Books as part of their Shaman Pathway series but did you know there are lots of other books in the Pagan Portals and Shaman Pathways series too?

A  Facebook page was also set up recently for the series.

These series consist of lots of small books, packed with information and in many cases, exercises to help you, so why not click and have a look. If you like the page then its easy to stay on touch with what is being published in the series too.

White Buffalo Calf Woman is a sacred woman of supernatural origin central to the beliefs of the Lakota of North America. There is a beautiful legend attached to her which can easily be found online so I won’t go into it here rather I will share the message that she has given us today.

‘When times are hard and you feel like giving in reach out, for there is always something greater, stronger, more powerful than yourself in your human form that will be of assistance. Sometimes this help is found outside of yourself, sometimes it is within you but it is always there waiting for you’.

As I sat with the connection or teacher that is Beauty I had one phrase pop into my head ‘Beauty is in the eye of the beholder’. Having had this thought I stopped and looked around at all the beauty that surrounds me, beauty that I take for granted until that is I am reminded to stop and look.

The message I was given from Beauty though was this:

‘Stop what you are doing and have a good look, not at your surroundings but at yourself. See what an amazing creature you really are. Open your awareness to the healing powers of your body and marvel at its abilities. Take time to sit and connet with your soul. These are what is really beautiful not the outer wrapping that this gift comes in’.

This week when drawing the connections cards to find the conection or teacher that had a message for us I drew two cards. They were back to back and firmly stuck together. The first one I saw was Growth and the second Serpent but even just looking at them I was getting a firm message that they belonged together here.

Often when I draw two cards I will listen to them separately and post their individual messages but because of the sense of them being together this message is from both of them.

‘Just as the Serpent sheds its skin so must you in order to grow. The Serpent does not spend its days trying to hold onto what is dead or dying but rather struggles to move out of it and to leave it behind and so must you. There is no Growth, there can be no Growth without leaving behind the old part of yourself, the part that is no longer alive’.

Spirituality is a connection that I am always happy to see come up. Words of wisdom from the teacher that is Spirituality are always welcome 🙂

This morning when I sat down to draw a card for everyone for the week the card that I found in my hand was Sexuality. This is not a connection I know well for it does not appear in my own web of life.

Sometimes unusual connections are easier to listen to for there are no presumptions to be made about the message it is bringing. Sometimes though it is the opposite and they need to be listened to more closely which was the case with Sexuality.

‘Do not shy away from your own sexuality, nor use it as a tool or even a weapon to get what you want. Rather connect with it and see it for what it is, an intrinsic part of who you are and something that is very beautiful’.

I am an author, a retired shamanic and energy healer and an OBOD Ovate. My path has been eclectic and always independent in that I have learnt in the main from my guides plus the occasional human and flexible distance learning hence the name of my blog. I am also a colour pencil and watercolour artist and my website/blog can me found at http://yvonneryvesart.wordpress.com

Solitary Path
Create a free website or blog at WordPress.com.